OhGodAnETHlargementPill: Download from official site, GitHub (for windows 10 and linux).

In this tutorial, you will learn how to set up and use OhGodAnETHlargementPill r2, r3 and newer.

OhGodAnETHlargementPill - is a mining pill designed for users of Nvidia graphics cards based on GDDR5X video memory (GTX 1080 and GTX 1080 Ti). It significantly increases the hash rate when mining cryptocurrencies using the Ethash algorithm (Dagger Hashimoto). The program is available for both Linux and Windows.

ETHlargementPill was released for GDDR5X memory only. All you need to do to increase the hashrate of Ethereum (ETH) or another Ethash based cryptocurrency to 50 MH/S on a GTX 1080 Ti (up to 40 MH/s on a GTX 1080) is to run it along with your miner.

NiceHash QuickMiner already includes the same functionality and is 100% safe to use. Use QuickMiner instead.

In 2021, OhGodAnETHlargementPill is no longer needed if you are using PhoenixMiner. You should use the command -straps 2 for the same effect.

In another mining program - NBMiner, use the command -mt. It does the same thing as a pill. This setting is enabled when mining on 1080 and 1080ti GPUs.

If you still need a “tablet”, then it comes with the NiceHash client.

If you nevertheless decide to use this software separately.

Leave the program window open and start setting up mining for maximum profit. I had to raise PL from standard settings from 55 to 80, and the memory frequency was increased by 50 MHz. 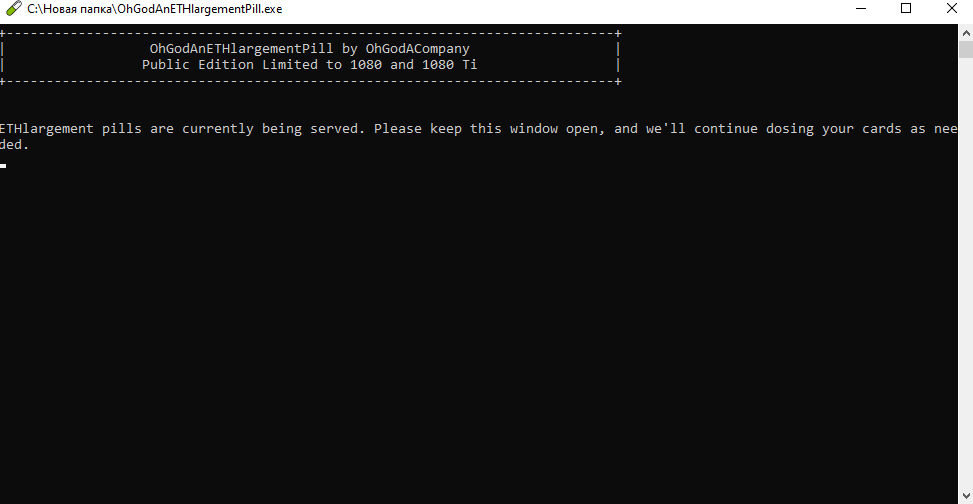 After completing these procedures, you will see an increase in the hash rate on video cards with GDDR5X memory.

Disable ETHPill by this command mpill and instead use the "mt": 1-6 argument in the advanced trex client setup.

Run --revA Command with the Tool.

Some GTX 1080s don’t run well with the default tool, so they could attempt to use this command. This is also found on the ethlargement’s prescription:

You may have noticed the numbers after --revA. These values are the gpu slots, and they are a requirement to run the program properly. For instance, if your mining rig is composed solely of GTX 1080s and you have 3 cards, it would be --revA 0,1,2.

Also, if you’re wondering how to do this for Windows, you have to use the command line and change directories or folders into the exact location of the ethlargement program before copy and pasting that command in. To know it works, it should pop up the program.

Note! Some GPUs will perform better if you run Ethlargement after your mining program start hashing away.

What GPUs does the tablet work for?

As mentioned above, the tablet only works with GDDR5X memory. Find this memory in the table and you will see the model of the video card.

See below the ideal clock setting for several models of boards with NVIDIA chip:

Is there a version for AMD?

For AMD, an alternative version is used - AMD Memory Tweak.