In this tutorial, you will learn how to set up and use WattTool v0.92 and newer.

WattTool - used to reduce power consumption and overlocking video cards from AMD. The program is suitable exclusively for miners. It is able to change the voltage and frequency control of the video adapters. The utility is especially popular for the RX line, both 480 and 580.

Attention!
While you can use WattTool, it is no longer supported. It was replaced by the OverdriveNTool utility . We recommend upgrading to the new version.

Download the program from the official source - overclock.net forum. 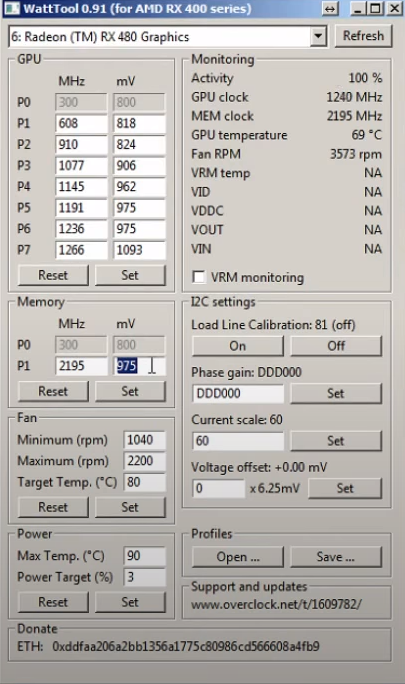 Repeat the steps to find the desired frequencies until the values ​​reach the most effective. At the same time, watch out for drawdowns by hash rate. The farm must be stable. When you are satisfied with the indicators, press the "Set" button.

The performance of GPUs is always locked at a certain rate by the manufacturer. This is done so that the video card does not overheat and meets the declared service life. However, this is extremely inconvenient for miners. They need to increase the power of their graphics hardware. If you have such a problem and you are the owner of an AMD card, we recommend that you pay attention to this program.

Attention!
Vega graphics cards and many others are not supported. To work with such cards, you need MSI Afterburner along with a special BIOS firmware for the video adapter.

The program is used to monitor the state of graphics processors, adjust the voltage and speed of coolers. The utility allows you to reduce power consumption, power supply load. An ordinary user does not need such functionality. However, it will come in very handy for farm owners. Reducing power consumption will allow you to earn more, reducing the payback period and increasing the duration of the graphics adapters.

The program can also be suitable for those who need to increase the performance of video adapters. Using the client, you can overclock the graphics card by setting the optimal frequency of the video memory and core. In addition, the utility is worth downloading for the sake of increasing the rotational speed of the fan blades. This process is mandatory, since overclocking a video card necessarily leads to increased heating, which ultimately will cause the graphics card to burn out. By default, the utility sets the limit to 90˚C. If necessary, the indicator can be changed. However, this can be done only by realizing the risks of a quick failure of the graphics card.

Is there a version for Nvidia? No, there are alternatives. For example:

If you find the error “Mutex creation failed”, run the program as administrator. The problem appears when there is a working program that monitors GPUs, for example GPU-Z. In this case, the utility is already acting on behalf of the administrator. Therefore, there are mutual synchronization exceptions. To fix the problem, you need to download and run Wattul as a regular user. Next, you need to close all programs in use, and then restart the utility.

We have identified the following features of the program:

However, the program is no longer supported and it is recommended to use OverdriveNTool and PhoenixMiner